Part 1. How to Download Apple Music on Android Phone

First of all, let's see how to download Apple Music on Android phone.

Step 1: Launch Apple Music on your Android phone, then go to "My Music" or "Playlists".

Step 3: Tap "Download" icon to download Apple Music. After that, you can find the contents on the storage built into your Android phone. 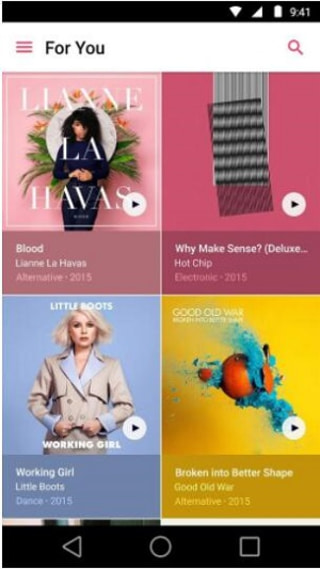 Part 2. How to Get DRM-free Apple Music on Android Phone/Tablet

Once you launch TuneFab Apple Music Converter, iTunes will be launched automatically, provided that you have installed the latest iTunes version on your computer. Then click on relevant music files on the left-side "Playlists" menu so that all tracks containing in the files will be shown on the upper section. After that, tick the box in front of the song that you want to play on Android. Or you can enter the song title on the search box to search it.

Note: If you can't find the category, then click on "Refresh" button to update the iTunes library.

As TuneFab Apple Music Converter enables you customize output settings, such as output format and output files, so the next step is to adjust output parameters. Go to the Output Settings section, click on the inverted triangle-like button of Output Format option and choose the output format from the drop-down list. There are 8 usual formats you can choose, including MP3, M4A, AC3, AIFF, AU, FLAC, M4R and MKA. Once you change the output format, the other settings such as codec, bit rate, channel, etc. will be changed accordingly.

Besides, you can reset the output folder by clicking on the square button near the Output Folder option. If not, then the output files will be saved in the default folder.

Now you can click on "Convert" button on the top menu to start the conversion. When it finishes, you can find DRM-free music on the output folder.

The last step is to transfer the converted Apple Music to your Android via a USB cable so that you can play Apple Music offline on Android.

Actually, TuneFab Apple Music Converter can not only remove DRM from Apple Music, but also solve Apple Music problems such as Apple Music offline not working on Android, Apple Music playlist not syncing issue, etc. Here is a tip for this powerful program.

Though TuneFab Apple Music Converter provides free trial version and charged full version, the free trial version only allows you to convert the first 3 minutes of each song, so you had better get the full version to unlock the limitation. TuneFab Apple Music Converter offers Personal License and Family License, just choose one of them according to your needs.