Even though Apple Music lets you download songs on its app, the downloads are DRM-protected and they are not normal audio files like MP3. There are situations where you want to put Apple Music tracks on devices that primarily play music, such as Sony Walkman, SanDisk Clip Jam, and other MP3 players that offer compelling features, but none of them are compatible.

In this case, you can convert Apple Music to MP3 with a professional Apple Music Converter and then move them for flexible playback. Here in this post, I am going to show you a step-to-step guide on how to do that, along with some tips on converting songs purchased on iTunes to MP3 within iTunes easily.

TuneFab Apple Music Converter is an amazing program that I use, love, and highly recommend with confidence for your use. Hopefully, it'll help you as much as it helped me for Apple Music to MP3 conversion.

Part 1. Overview of the Best Apple Music to MP3 Converter

Before telling you how to use a third-party tool, here I will introduce the best tool TuneFab Apple Music Converter, which lets you convert Apple Music to MP3 in high quality that is almost the same as the original one. Besides, unlike some ordinary audio converters, this tool can bypass DRM and successfully finish music conversions, as it's packed with features like Apple Music DRM removal as well as protected audio conversion.

The brand-new TuneFab Apple Music Converter V3.0.0 is launched now! Check the full comparison between V3.0.0 and the old version before getting started with it:


TuneFab Apple Music Converter is a professional tool that can finish Apple Music conversion and let you listen to music on an MP3 player. All ID3 tags will be well-saved and you can identify them easily when playing them on it. For more information about this tool, you can take a look at its specification.


Knowing something about TuneFab Apple Music Converter, you may wonder why I recommend it. Well, when it comes to time-saving and high-quality music conversion, which is the most efficient point you should focus on, this converter performs the best among most Apple Music converters.

It should be convenient to use - Converting Apple Music can be a frequent task in your life. If it's complicated to operate, you may soon want to use an easier one. TuneFab Apple Music Converter has integrated the Apple Music web player, in order to enable users to directly search for Apple Music albums to process the music download without syncing with iTunes anymore. 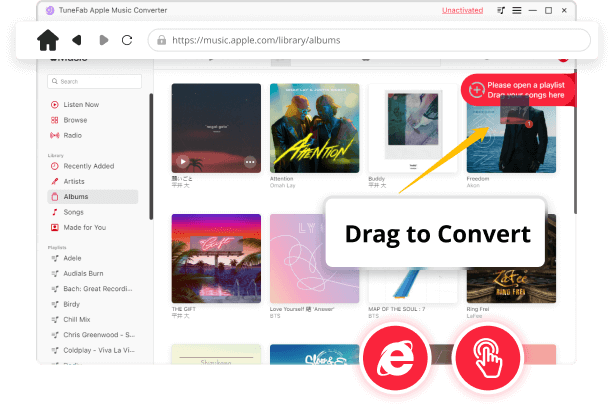 You don't want to wait for a long time - A good music converter should be able to convert songs in batches and finish the music conversion at a fast speed so that you can get your favorite songs offline as soon as possible. TuneFab can convert multiple songs, playlists, and albums at the same time at 5X speed saving you from the frustrating and time-consuming conversion process. (It can reach even faster speed when your network condition is stable) 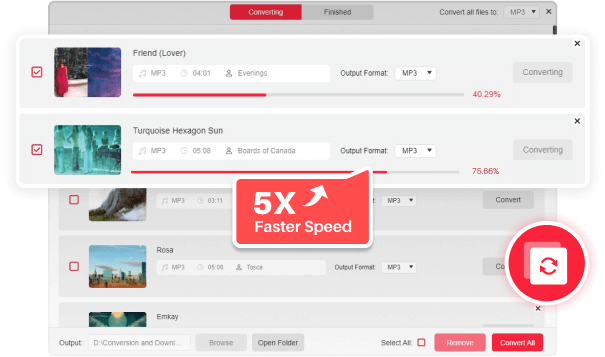 Take sound quality into account - No one wants to listen to songs with lossy quality. When you are picking an Apple Music converter, you need to check if it can preserve the original quality or be of high quality. TuneFab Apple Music Converter provides you with various quality settings. All downloaded Apple Music songs can be with the original sound quality preserved.

Overall, TuneFab Apple Music Converter is the one that gets you satisfied with every aspect. Let's cut it short and check out how to convert Apple Music files to MP3 in 5 steps with it.

Download, install and launch TuneFab Apple Music Converter on your Windows PC or Mac. When you launch the program, click on the "Open the Apple Web Player" on the welcome page 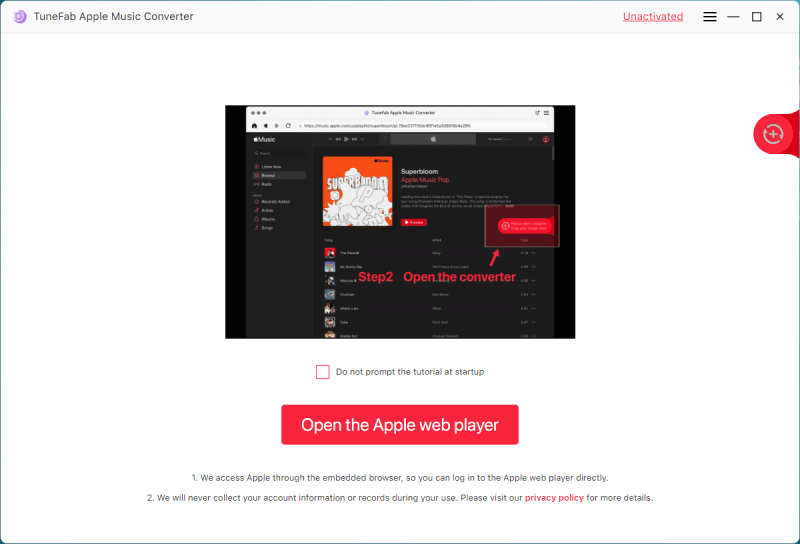 After signing in the web player, you can browse the Apple Music library to access any album to download for streaming offline. All content from the Apple Music library can be converted on this app, including albums, playlists, and even all songs from your favorite artists. Only by dragging them to the "Convert" button, all the songs contained will be added for getting ready to process the conversion. 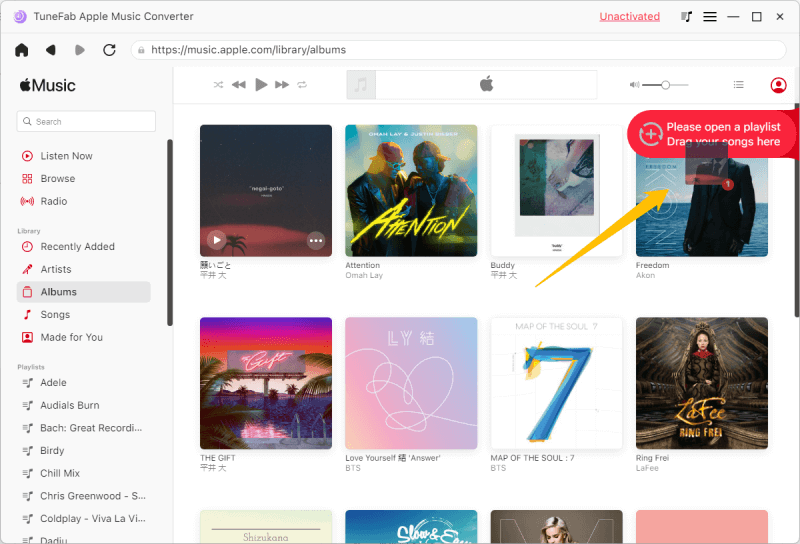 On the conversion window, you can select an output format such as MP3 from the "Convert all files to" menu to download the Apple Music tracks. 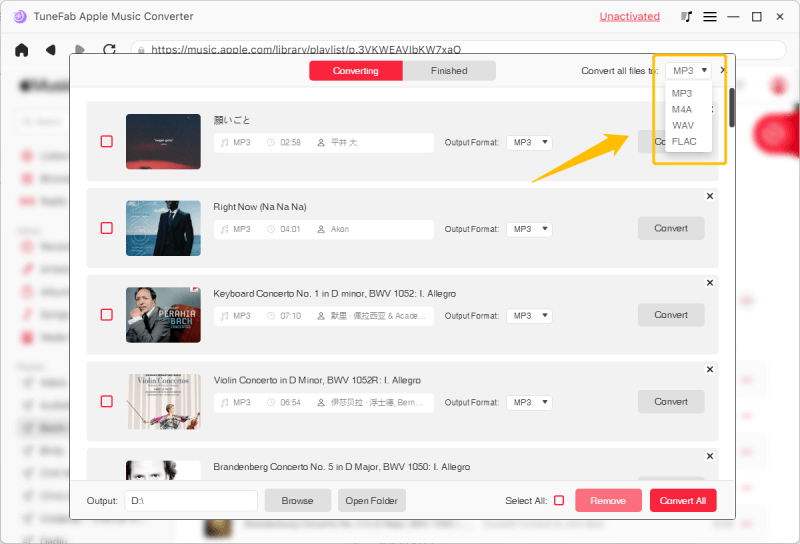 To further customize other parameters such as the Sample Rate or Bitrate, you should go to "Preferences" to adjust the figures under the "Advanced" tab. To make the converted music close to Apple Music's original quality, it's recommended to set up songs in M4A with SampleRate 44,100 Hz and Bitrate 256kbps. 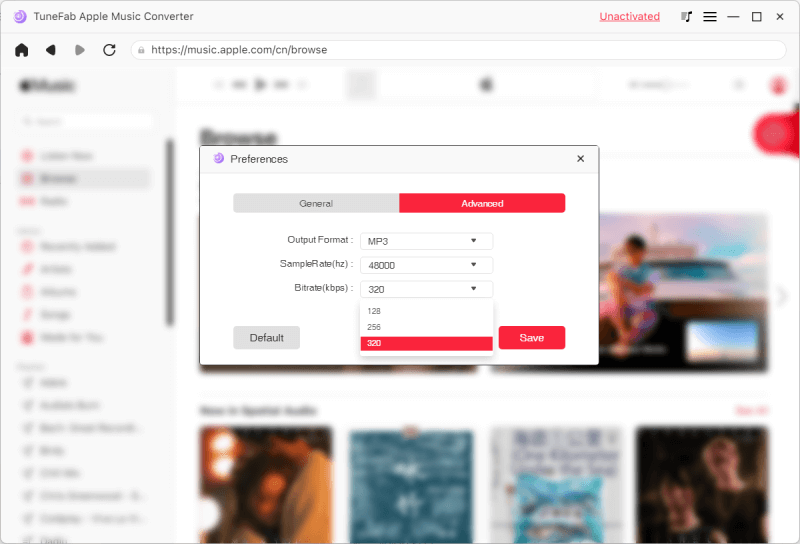 In the final step, click on the "Convert All" button to start converting all Apple Music to MP3. TuneFab Apple Music Converter will complete the conversion for you with quick speed in a while.

When the music conversion is done, you can find all songs in the output folder. All ID3 information can be well-preserved including the album cover, song title, album title, and artist, which is easy for later management. 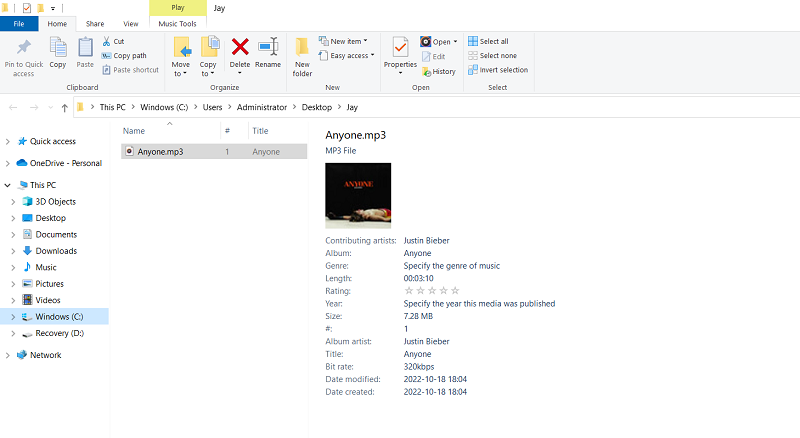 TuneFab Apple Music Converter is extremely easy to operate, and works like charm. In my test on Windows PC, it takes less than 10 minutes to convert a 45-minute album while maintaining the original music quality. But if you are not a fan of installing a third-party tool, just try the next method.

Part 3. How to Convert Song Files to MP3 with the Apple Music App or iTunes

Compared with songs from Apple Music, songs you purchased from iTunes or the Music App on Mac are not DRM-protected. They are also encoded in AAC format but with .m4a file extension. Conveniently, these purchased iTunes music can be directly converted to MP3 with iTunes and the native Apple Music App on Mac. After creating an MP3 copy of your favorite music, you can better manage and play them on your music device.

Note: Not necessarily all iTunes-purchased music after 2009 is DRM-Free. Therefore, you may still have to check if it is attached with DRM protection and unprotect iTunes songs. If the song you are trying to convert in this method is DRM-protected, you will fail in the last step as the option will grey out. In this case you can only use the third-part tool TuneFab iTunes Music Converter to change it to an MP3 version.


Convert Songs with the Apple Music on Mac

Normally, the Music app is installed on Mac computers so you don't need to download other software for MP3 copies. The steps below will help you do that.

STEP 2. Change encoding settings
Click the menu next to Import Using, and choose MP3 Encoder and select an output quality from the setting drop-down menu. Don't forget to click OK to confirm.

STEP 3. Convert songs to MP3 with Apple Music App
Select songs in your library that you want to convert. On your keyboard, hold down the Option key, and choose File > Convert > Create MP3 Version. And then the converted songs will appear in your library next to the original song files as MP3 files.

Tip: To convert songs from a folder or on a disk, just select the folder or disk after you select File > Convert > Convert to [MP3].

iTunes on Windows PC can also convert your purchased DRM-free songs to MP3 with the MP3 encoder. Now follow the steps below to convert your songs. If you see Create AAC Version instead of Create MP3 Version, you should change your import setting first. Go to Edit > Preferences... > General > Import Settings... > Import Using and choose MP3 Encoder from the drop-download list.

STEP 1. Get your songs ready on iTunes.
Import your purchased songs to the iTunes library.

STEP 2. Convert songs to MP3 with iTunes.
On your keyboard, hold down the Ctrl key, and choose songs. Then File > Convert > Create MP3 Version. And select songs in your library or the folder or disk that contains songs you want to import and convert. Not long after, the converted songs and the original song files will be shown in your library. 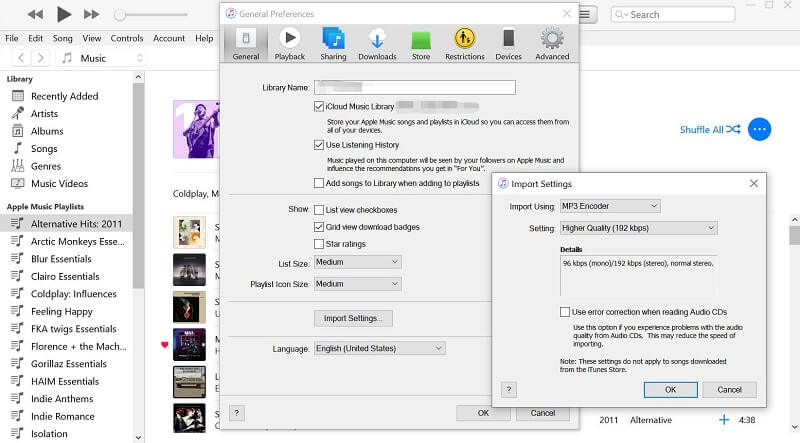 Note: All MP3 files created in this method are compressed copies of the original one. You can't hear the differences clearly, but if you want a better-quality copy, you can choose the AIFF or WAV Encoder instead of the MP3 one. Or convert them to MP3 with TuneFab iTunes Music Converter.

Before you know such a tool to convert Apple Music, you may have thought of extracting Apple Music downloads and converting them to MP3 with a common audio format converter. It's normal that it fails.

When you download songs from Apple Music, you will get audio files with the .m4p file extension name which are locked by Apple's FairPlay DRM. By default, AAC (Advanced Audio Coding) is the encoding format of M4P files which makes Apple Music users can only play music on specific devices.

(Apple Music is preinstalled on the iPhone, iPad, iPod touch, and all macOS devices, and that for Android is available on Android 4.3 or later.)

Honestly, the popularity of AAC format is much lower than MP3 at present, except for Apple devices, most music players on the market still fail to support direct playback of AAC files. According to Apple, this format has the same sound quality as MP3, and files encoded in AAC format are slightly smaller than MP3. These are the reasons why you need to convert Apple Music M4P to MP3.

Can You Convert Apple Music Without Quality Loss?

If you are an audiophile and wonder if it will reduce the sound quality when converting Apple Music to MP3, it depends on the tool you use. When you do this with a third-party professional Apple Music to MP3 converter, you can set the parameter to match the original quality and get the MP3 files in the best quality. If you prefer to use the official way to convert your purchased songs from iTunes, the converted songs will be compressed.

After converting Apple Music to MP3 songs, you can import the converted MP3 files back to your iTunes music library or copy them to other non-iOS gadgets or computers without having to be authorized with your Apple ID. The best part is, once you have tried this multi-functional iTunes converter, even if you cancel your Apple Music subscription, you can still be able to keep Apple Music forever without paying a penny.

Last but not least, don't you be puzzled by the name of TuneFab Apple Music Converter. It not only supports converting Apple Music to MP3 and many other playable formats but also supports converting M4B Audiobooks to MP3, which is a fantastic choice to put audiobooks on your car. Apart from that, it can also extract audio from iTunes M4V videos, and save audio files like MP3, M4A, AC3, FLAC, or other formats. All in all, this versatile and powerful converter is definitely worth a try!