It's common that people can use its Facebook account to log in the Spotify, yet desires to disconnect Spotify from Facebook vary as well. Still, there is a certain group not in the Facebook audience, or they refuse to get a new app as the attachment of another one. In this sense, how to disconnect Spotify from Facebook is what they try to achieve a clean Spotify using. Actually, such disconnection can arrive if you get to know these intriguing matters.

If you're a newcomer to Spotify, please pay attention to the login process. As we enter the page, there are two options: "Log in with Facebook" and log in with username and password. To disconnect Spotify without Facebook, here you should use the second one. This asks you to create a new Spotify account to clip "Sign up" at the bottom. Then you fill in the related info to finish Spotify registration. In this way, you can absolutely avoid binding Spotify to Facebook. But you've missed it already, then you have to find another method. 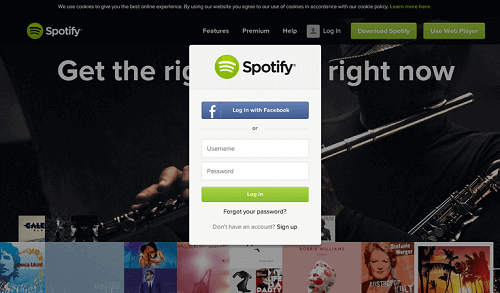 What if you already get Facebook connected to Spotify? Take it easy. It can be solved on either Spotify or Facebook.

First I have to inform you this way only works for Spotify desktop app. That is, if you get accustomed to using Spotify on mobile, it doesn't mean anything, and you'd better directly move to the next part. Anyway, with a Spotify desktop app at hand, it is quite an easy thing to disconnect Spotify from Facebook. Simply, you just open the app, and then go to "Settings" > "Social" > "DISCONNECT FROM FACEBOOK". Following these steps, you will quickly get rid of Facebook connection and enjoy a clean Spotify listening.

Step 4. For Facebook app on Android or iOS, here you should go to "Logged in with Facebook" > "Spotify" > "Remove App" > "Remove", and then the problem is settled. 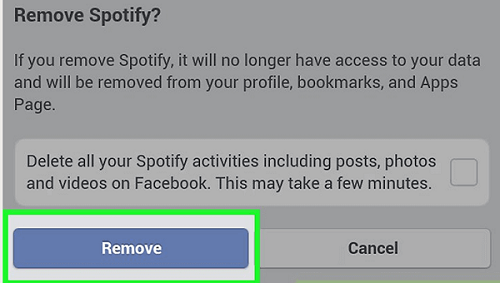 Actually, some say a rude but simple way is to directly cancel the current Spotify account and create a new account without the Facebook connection. To some extent, it is also workable. But there are some limitations, though.

1. After you cancel the current student account, you cannot apply the student discount to the new establishment until 12 months' waiting.

2. The music and playlists are only on the old account. That means you have to resave them on the new one.

For the second and largest shortage, there is also an alternative way to get it done. We know that the cache Spotify music songs rest with the original account and cannot be played on other non-Spotify media player. That's because the Spotify music file is under special protection work. The recipe for the current situation is to crack it down and make Spotify music available and permanent.

From this perspective, here we recommend you to try TuneFab Spotify Music Converter to better perform the cracking work. It's designed to treat the format protection of Spotify music, and then convert the music to common ones in MP3, M4A, WAV, and FLAC. After that, you can have a nice try to transfer the music file to other devices like an MP3 player and will surprisingly find it playable greatly. In this sense, you've got the permanent use of Spotify music.

▪ Remain the original Spotify quality at most

▪ Share permanent Spotify Music even for a free user

If you would like to disconnect Spotify from Facebook, it's best not to log in to Facebook but to create a new Spotify account with your email address. If you already have done, anyway, it's still working to make it with some removal process on either Spotify or Facebook. Still, we appreciate your use of TuneFab Spotify Music Converter to offer you a much more pleasing Spotify amusement.