"For the past one month or two, the search function indicates that I am offline and cannot search, although my phone is connected either through wifi or 4g. This includes my home wifi network."

While using and playing Spotify on S7, users are confronted with various problems which make Spotify playing on S7 difficult or even impossible. To solve these problems perfectly, this post will list the common problems for Spotify users when enjoying Spotify on Samsung Galaxy S7 and the 4 common solutions. Among all the solutions, a more feasible solution with TuneFab Spotify Music Converter on how to fix S7 Spotify problems will be also provided for reference. Read below to find any solutions that could help!

Samsung Galaxy S7 users always find that offline message in Spotify comes on and off randomly and suddenly. This extremely confuses Spotify users because apart from Spotify, all the other apps on S7 are connected to WiFi and 4G.

The serious problem for Spotify users to play Spotify on Samsung Galaxy S7 is that Spotify is totally un-useable. Once this problem happens, Spotify songs will start lagging and skipping randomly at the beginning and finally become totally unresponsive no matter how many restarts and uninstall you make. This can easily make users annoyed.

The problem indicates that Spotify songs name or album art does not always update in the control bar at the bottom of the screen while the song has already progressed.

Another common S7 Spotify problem - Spotify keeps crashing. This problem always happens while they are changing Spotify songs, skipping Spotify tracks or even listening Spotify offline. They try restarting or re-installing, but sometimes it doesn't work.

All the above are the most common problems of Spotify on Samsung Galaxy S7, which is annoying and confusing. Then how to solve these problems? The followings are several effective solutions for you to fix S7 Spotify problems. Hope they can have any help for you:

A reboot can fix almost all the minor issues. While rebooting your Galaxy S7, you can reboot lots of services in the background beneficial to your problems.

How to Reboot Device:

Another solution is to clear cache and data of your Spotify. You can use it and see if it's able to solve problems of Spotify on your Samsung Galaxy S7. 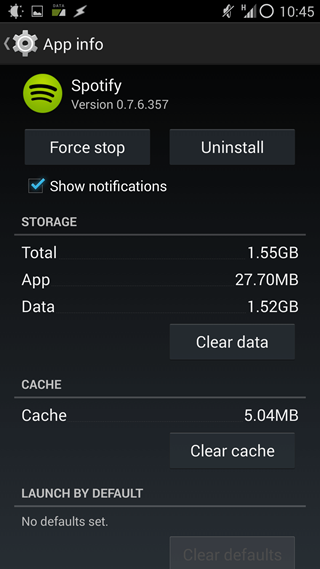 Note: You may lose your playlist as well as downloaded music after resetting your Spotify. But you'll regain these things playlists when the problem is fixed and having a login to your Spotify account again.

Solution 3. Uninstall and Reinstall Your Spotify

If the two above solutions don't work, you can try re-installing your Spotify to fix S7 Spotify problems. It's better to uninstall and reinstall your Spotify rather than try the available update to fix Spotify crashing problem on S7 since compatibility issues are among the most common causes of app crashes.

How to Uninstall Spotify:

How to Reinstall Spotify:

Before resetting, disable Factory Reset Protection to make sure you won't get locked out of your phone after the reset:

Step 1. Swipe up on an empty spot to open the Apps tray from the Home Screen.

Here's how you can reset your phone:

Step 1. Turn off S7 > Press and Hold Volume Up Key and Bixby Key

Step 2. Press Power Key gain and then when the green Android log displays, release All Keys

Step 4. Press Power Button to Select and then Press Volume Down Key (until 'Yes — delete all user data' is highlighted)

If all the above solutions still cannot help you fix problems of Spotify in Samsung Galaxy S7, here's another solution - use TuneFab Spotify Music Converter to download Spotify tracks you want on your computer and then transfer them on your S7 SD card for offline listening. Then you don't have to worry about Spotify crashing or lock screen on Samsung Galaxy S7.

TuneFab Spotify Music Converter is a powerful and maneuverable music converting software which enables you to remove DRM from Spotify, convert Spotify tracks to MP3, M4A, WAV, FLAC, etc. and then freely download them for offline playing. It also supports a variety of editing functions to improve music quality like bit rates and sample rates customization. Thus, download it first and then follow the simple steps below to download Spotify music and save it on your SD card to fix S7 Spotify Problems.

Make sure that you have downloaded the Spotify App first. Then please download and install TuneFab Spotify Music Converter on your computer. Afterward, you should follow the instruction of the program.

After the installation, click "Add Files" to add Spotify playlists, albums, tracks, and artists. You can import Spotify songs from Spotify by simply dragging them into the program in the interface. Also, you can choose to copy and paste the Spotify playlist link into it. 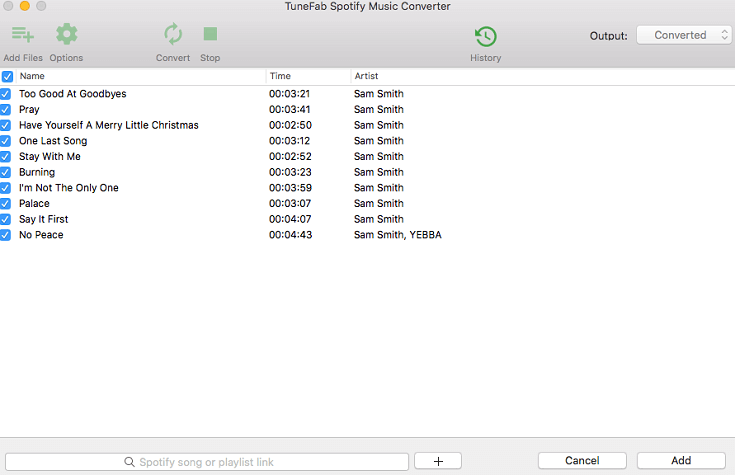 Go to "Options" > "Advanced" to choose the appropriate output format. By clicking the drop-down menu, you can choose MP3, M4A, WAV or FLAC as an output format as you want.

Go to "Options" > "General", it'll indicate the default file folder. If you want to change the destination folder for saving, click "Select..." to reset your converted file destination. 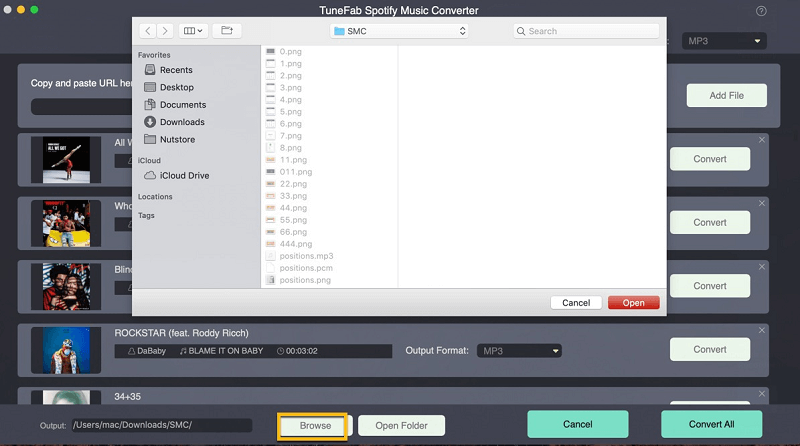 Now, you're certain to know about the common Spotify problems on Samsung Galaxy S7 like Spotify lock screen and Spotify crashing. Hence, it's time for you to fix S7 Spotify problems. Anyway, downloading Spotify music to listen offline by using TuneFab Spotify Music Converter is incredibly a good choice because of easy and simple operation! Try it and be free to leave any question!