Part 1. The Introduction of Kodi Part 2. Kodi and Apple Music Part 3. The Essence of Kodi

Instead of downloading all kinds of players to satisfy your needs for different music, videos, and other multimedia resources, only one app is required. It refers to an open-source media player. This passage is going to introduce Kodi, the famous and wide-used one, and actually, help you how to play Apple Music on it.

Part 1. The Introduction of Kodi

Kodi (formerly XBMC) refers to a free, open-source media player software application which is developed by the Kodi/ XBMC Foundation. The Foundation is a non-profit technology consortium. Basing on this, Kodi always aims at providing a good multimedia experience for the public, and with the support of eight sponsors. As an open-source media player media player and featuring a 10-foot user interface for use with televisions and remote controls, Kodi is available for multiple operating systems and hardware platforms. It allows users to play music, videos, photos, TV shows and other media files from users' own storage or the Internet. In addition, Kodi has a relatively high customizability. It provides a variety of skins for users to change the appearance of the application in their preference. Also, all kinds of plug-ins are offered to make users have the access to other Internet Content such as Spotify, YouTube, and so on. Besides, Kodi has high compatibility and is able to run on a huge range of devices and systems such as Windows, OSX, IOS, Android, Linux, and Raspberry Pi. 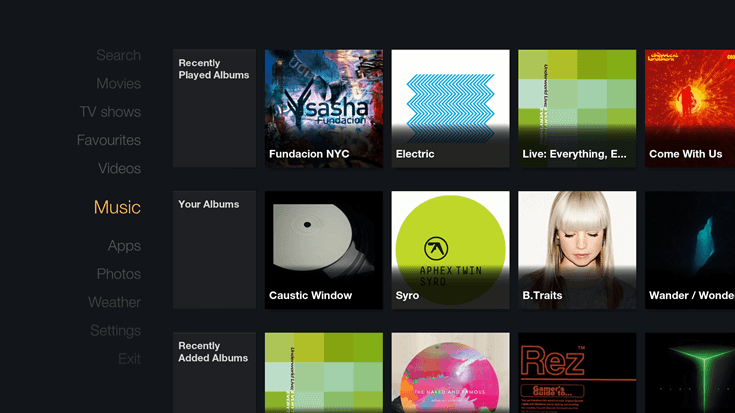 Of course, before running the tool, you need to download and install it. (Besides the converter, iTunes is also needed because two tools would be connected automatically. The items in iTunes would synchronize with TuneFab.)

Step 2. Select the target songs you want to convert

After connection, you can find the Playlist has synchronized with iTunes. Select the "Music" from the "Library", and the songs of your Apple Music will be shown on the right side. Then choose one or several songs you want to convert, ticking it.

You can set the data of output files in the "Output". Here we choose MP3 format. Other data like output folder, filename, codec, bitrate, etc. can be set by yourself.

Step 4. Convert the files and how to find the converted files

After the setting is done, you just need to press the "Convert" button and waiting for the files to be converted. After the conversion, an "View output file" would be found. Click it and you will find the files.

Besides using the apps, you can also gain other guides of using music functionality of Kodi from the forum of its official website.

Part 3. The Essence of Kodi

Some people may not be familiar with the meaning and operation of the open-source media player. They would also wonder whether the usage of this kind of applications is legal or not. Here are the explanations. Firstly, as we know from above, Kodi is a media player, which offers only a place for multimedia to play and actually contains no music, video, etc. contents. Users have to search for the resources themselves and then play on Kodi.

Secondly, although Kodi can provide you with the plug-ins to watch many resources you have access to if the resources are non-purchased or piratic ones, then you are breaking the law. You download the Kodi but you still have to purchase the resources that are not free.

When you have purchased the Apple Music, you download them and convert them into the format which could be played on Kodi. This is a legal way to enjoy Apple Music. But if you listen to the private one, you are definitely breaking the law.

Objectively speaking, whether you are breaking the law depends on yourself instead of the application. Kodi does not provide any illegal resources or contents itself, so it is 100% legal. Although the plug-ins of Kodi provide you with the access to enjoy many kinds of resources, you have to follow the Copyright Law.