"I was just wondering if there's any way to get Apple Music on my Chromebook, because I can't download iTunes."

Part 1. The Reason of Apple Music Not Working on Chromebooks

Google clearly claims that users can play music files and videos on Chromebook or through the web and they can add music to Google Play Music library. Does this mean you can transfer iTunes music to Chromebook for playback? Definitely no! Chromebook supports file formats including 3GP, AVI, MOV, MP4, M4V, M4A, MP3, MKV, OGV, OGM, OGG, OGA, WEBM, and WAV. However, Apple Music songs are formatted in M4P which is encrypted with DRM for protecting copyright. Obviously, M4P is not included in the supported file formats of Chromebook. Then, what should you do to deal with such issue? It's easy if you try to convert M4P to MP3 which can play on Chromebook smoothly.

Given that the conversion from M4P to MP3 needs software supporting, we want to share TuneFab Apple Music Converter to you. It is the quite powerful and professional software which can convert Apple Music, iTunes M4P music, AA/AAX audiobooks to common MP3, AC3, AU, AIFF, etc. You can also keep the original ID3 tags as well as metadata information in output files. After converting Apple Music to MP3, you are able to play Apple Music on Chromebooks via Google Play without restriction. Download it below:

Install and launch TuneFab Apple Music Converter on Mac or Windows PC. Here sets Mac version as an example. But the process is universal to the Windows version. Once the software started normally, iTunes will be launched automatically at the same time.

Click the relevant Playlists category, and all of your Apple Music songs will be shown on the right window. You can choose one or more songs you want to convert.

The next step is to select output format from the "Output" section. Set MP3 as output format and select the destination folder you want to save your output files in. When you finished all the settings, click on "Convert" to start conversion.

Note: You can learn how to convert Apple Music to MP3 easier by watching a video tutorial. 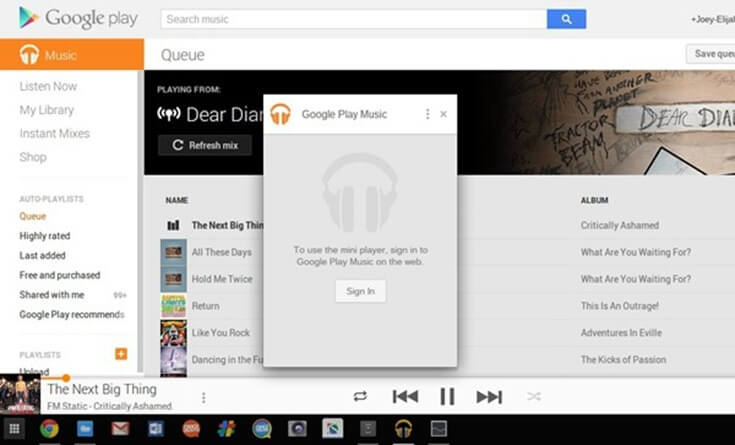 Part 3. Chromebook vs Laptop - Which to Choose

For those people who want to buy a Chromebook but still have anxiety about it, they should know more about advantages and disadvantages of Chromebook. To figure out the two points, just keep reading and focus on Chromebook reviews with five up-most features.

A Chromebook is a laptop of a different breed. Instead of Windows 10 or macOS that laptops installed, Chromebooks run Google's Chrome OS. These machines are designed to be used primarily while connected to the Internet, with most applications and documents living in the cloud.

Low prices which range from $85 to &999, long battery life and ease of use are just a few reasons why Chromebooks are attractive.

Most Chromebooks fall between 10 and 15 inches of screen size. When it comes to RAM, Chromebooks come with either 2GB or 4GB. Comparing to other laptops, Chrome OS is so lightweight so that they often don't need much storage.

Chromebook is equipped with built-in virus protection and updates automatically when you're online, so you'll have the latest features without slowing down. Plus, you can sign in with your Google account to switch between accounts and devices without ever missing a beat. You can find apps you are interested in Google Play Store and entertain online or offline. What's more, some of them enable touch screen which makes your work or study smoothly.

With so many superior features, I believe you can make a quick decision on selecting Chromebook or laptops. Hope you get the one you like.