"I just got a Chromecast Audio. But I can't figure out how to cast the Apple Music from my iPhone to my Chromecast for listening? Anybody can help?"

How to Get Apple Music at 320kbps High Quality

Do you like to stream your music to your home speakers via Chromecast Audio? Now through Chromecast Audio, you can access a plethora of music services like Pandora, Google Play Music, Spotify, and iHeartRadio, etc. However, the Apple Music is not supported by Chromecast yet.

Here, we would like to introduce the TuneFab Apple Music Converter for you. It is specially designed to get rid of the DRM protection from Apple Music and convert the M4P to MP3 for casting on Chromecast. It works at 10X faster speed to save your time. And it can preserve all the ID tags including a cover, date, author, genre, etc. after conversion.

#2 Parameters of songs like bit rate, sample rate and channel can be reset at your own will.

#3 Metadata like ID3 tags, cover and so forth will be kept as the original one.

#4 Batches of conversion are allowed on both Windows and Mac software.

After installing the free trial version of TuneFab Apple Music Converter on your Mac or PC. Click on launching it.

Note: With this free trial version, you can check the output quality with 3 minutes converted files. If you love it, please bear in mind that goes to our store to get the converter registered.

After launching Apple Music Converter, all the media files in your iTunes library will be shown automatically on the interface of the program. You only need to open the "Playlist" and then choose the Apple Music you want to play with Chromecast.

Now in the "Output" section, choose the MP3 format which is fully compatible with Google Chromecast from the drop-down list. You are able to customize other profile settings like codec, bitrate, channel, etc.

Then you can start to convert the DRM M4P songs to MP3 by clicking "Convert" button. After the process finished, go to the output folder to check your Apple Music songs in MP3 format.

If you are still puzzled about it, please watch the following video.

Now you might need to stream the DRM-free Apple Music to Chromecast audio so that enjoy Apple Music song on your home speakers freely. But you will need to get help from some apps first. Now see how to stream your Apple Music through Chromecast.

On Windows, you need Chromecast Audio Stream. Once it's installed, just select your Chromecast from the tray icon and your audio will start streaming.

On Mac, you can use Soundcast. Here, you'll first need to install Soundflower, then install Soundcast (you might need to reboot after installing Soundflower). Then, select Soundcast from the menu bar, select your Chromecast, and you're all set. 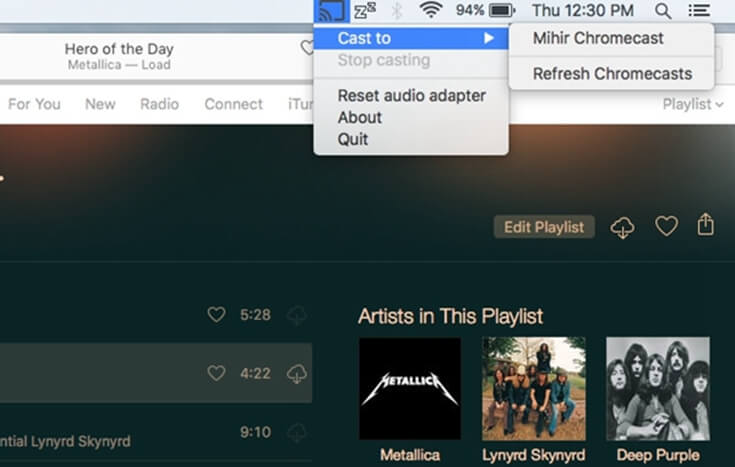 That's it. Now all you Apple Music songs can be played with Chromecast. What's next? Download TuneFab Apple Music Converter and take a try!