Part 1. Connection Between Spotify and Shazam Part 2. How to Create a Spotify Playlist from Your Shazam Tracks Part 3. How to Download Shazam Tracks from Spotify

Shazam is an application used to identify music, movies, etc. instantly based on a short sample. Spotify user can easily connect Spotify with Shazam and create a Spotify playlist from Shazam tracks. Let's find our more in this in-depth guide.

How to Convert Spotify Music to MP3

How to Add Shazam Songs to Apple Music Playlist

Part 1. Connection Between Spotify and Shazam

As one of the most famous streaming music services, Spotify has made a deal with Shazam, which enables users to recognize the music around you with Shazam and then click on "Play in Spotify" button to open the Spotify mobile app for playing the identified file. However, to do that, you are supposed to have a Spotify Premium account in order to listen to tracks in full.

Sometimes, you may want to play all music identified by Shazam, then you can create a Spotify playlist from your Shazam tracks.

Part 2. How to Create a Spotify Playlist from Your Shazam Tracks

No matter you use Android smartphones or iPhone, it can't be easier to create a Spotify playlist from your Shazam tracks, even if you are green hands. Just follow the instruction below.

Step 1. Go to "Setting" option of Shazam and then click on "CONNECT" button of Spotify option. After that, you can stream tracks in Shazam with Spotify.

Step 2. Then go to the Spotify app and create a playlist which Shazam tracks be added to. Or if you want to add the Shazam track to the current playlist, then you can skip to the next step.

Step 3. Now you can get started to add Shazam tracks to your Spotify playlist. Click on "Add" button on your Shazam interface when Shazam has recognized the track.

Step 4. Next you need to select one of the playlist from the list.

Step 5. Now, you will go back to Shazam automatically, when you see "Added to Listen later", that means you you have added the Shazam track to your Spotify playlist successfully. 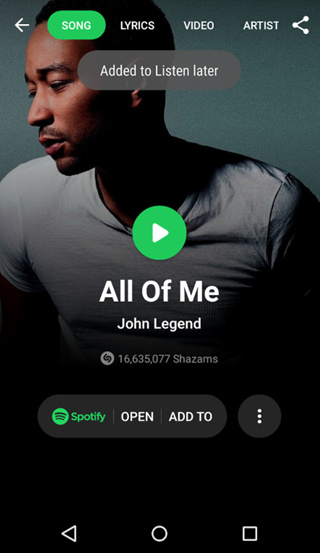 As some of you may use iPhone instead of Android smartphones, I hereby tell you how to create a Spotify playlist from Shazam tracks on your iPhone.

Step 1. To stream tracks in Shazam with Spotify, you need to go to "More Options Menu (3 dots)" and click on "Connect to Spotify" button, then you will see a new interface, just log in as it suggests.

Step 2. After connecting to Spotify, you can click on "Add" button on the Shazam result.

Step 3. Now it's time to select a playlist to save the Shazam track. Unlike adding Shazam tracks to Spotify playlists on Android smartphone, once your Shazam is connected to Spotify, a playlist called "My Shazam Tracks" will be created on your Spotify. But you can also select another current playlist as you like.

Step 4. If you have successfully added the Shazam tracks to Spotify playlist, then you will see the message on the top of the interface as below. 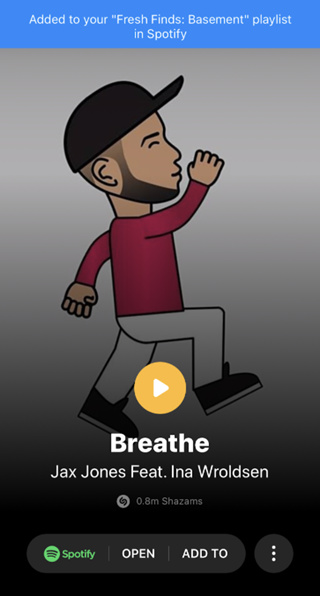 Now you can try to create a Spotify playlist from Shazam tracks. But if you want to download Shazam tracks from Spotify and save them as popular audio formats, you will need to use a professional Spotify music downloader. TuneFab Spotify Music Converter is the best tool that enables users to download music from Spotify without Premium and convert them to DRM-free MP3, M4A, WAV, FLAC, etc. at 5X faster speed. Besides, it can save ID3 tags and metadata information such as title, artist, album and more.

To try this powerful program, please click on either of "Try It Free" button as below to download it on your computer. After that, you can get started to download Shazam tracks from Spotify.

First of all, add Spotify music to the program. Just click on "Add Files" button, then drag and drop songs, playlists, albums or tracks from Spotify directly. In addition to that, you can copy the song link from Spotify and paste it to the search bar. After that, select the Spotify music from the list and click "Add" button.

The last step is to click on "Convert" button to start converting Spotify music. Once the conversion is finished, you will find DRM-free Spotify songs in the Output folder.

As you can see, only with a few easy steps, you can create a Spotify playlist from Shazam tracks, but for those who want to download Shazam tracks from Spotify, TuneFab Spotify Music Converter is worthy of trying.

TrustScore 2 | 8
Previous article [How To] Fix Waiting to Download on Spotify++ Next article Fixed: Spotify Songs Greyed Out [Updated]